The Legend of Wild Bill 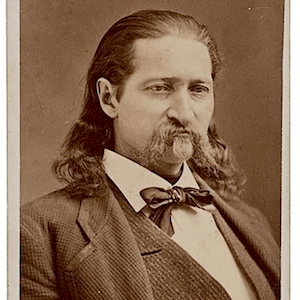 There are few names as synonymous with the Old West as James Butler Hickok, or better known as Wild Bill Hickok. His list of achievements, and likewise the stories of his adventures are too numerous to mention. In his life, Bill Hickok was a wagon master, spy, soldier, scout and even an actor and showman. Though some argue that many of the stories attributed to him are exaggerated, there is still no doubt that he led a full and interesting life.

Though, perhaps the thing he is most well known for is the so-called Dead Man’s Hand. Referenced in popular literature constantly, and now synonymous with being assassinated while playing poker, getting the specific hand is considered both good and bad luck.

But just what is the Dead Man’s Hand?

The part of the story that is well known is that, in Deadwood, Dakota Territory, now known as South Dakota, Wild Bill was shot dead by Jack McCall in Nuttal & Mann's Saloon. The specifics of the story tend to vary, as the legend has been recounted multiple times, and expanded upon with each passing. What is known for sure is that Wild Bill was shot in the back of the head by McCall, who was an unsuccessful gambler.

But what exactly were the cards Wild Bill held in his hand upon his untimely demise?

The truth is that there are no reliable sources to verify exactly what the hand was. It really is just speculation, and very likely lost in the infamously fickle legends of the Old West. It is now accepted that a pair of eights, and pair of Aces, all black, were what Wild Bill held. A pretty good hand, and a suggestion that it may indeed have been a winning hand. Though a card is missing from this version of the story, which generally seems to be overlooked.

But this account was only put forward in the 1926 book; Wild Bill Hickok: The Prince of Pistoleers, by Frank Wilstach. It is now most commonly accepted.

Western Historian Carl W. Breihan tells a different tale, claiming that Neil Christy retrieved the cards from the floor and reported them as an Ace of diamonds, Ace of clubs, two black eights and a Queen of Hearts. As to whether you believe one account or the other seems to be a matter of preference.

Either way, the cards are a reasonably good hand, and should be celebrated regardless, especially if you get to play them, win, and leave the table alive!