Why Do Sports Stars Love Poker? 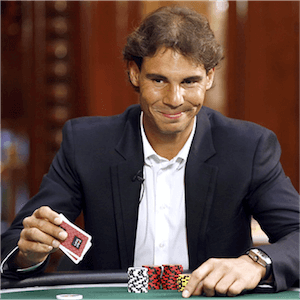 There is a long running perception and also a bit of a tongue in cheek joke that if you’re a sports star, chances are you’re also a poker fanatic. Why? Because it just so happens that poker seems to be the game that attracts sports stars like no other. So if you’re visiting a casino, be sure to have quick scan of the tables and see if you can’t spot any famous faces.

Tennis legend Rafael Nadal, for example, is widely acclaimed for having won Wimbledon a grand total of twice, and the US Open twice. So clearly he knows what he’s doing on the court. He also happens to be a poker fanatic, having entered into the game on a professional level in 2012. Boris Becker, likewise a tennis legend, similarly fancies himself a professional. Want more? Michael Phelps, Richard Seymour, Kyran Bracken, and Paul Pierce are also common sights at the tables.

So hang on, you’re now probably thinking, these guys who get their thrills playing fast paced, physically demanding sports are also into sitting on their backsides, looking at playing cards, and throwing chips onto a table? What exactly is going on here?

It really isn’t that much of a mystery, and fairly easy to put the pieces together if you think about it. Poker happens to be a mentally demanding game, is fast paced, and requires a deep, focused level of strategic planning. Sure, it may not be the most physically demanding game in the world, but is one that has massive appeal for those who enjoy high stakes, high reward play. To put it another way; it is the perfect means by which to keep your brain fresh, planning ahead, and focused on a complicated task. All with a huge focus on risk and reward.

Being a professional at any mainstream sport, be it tennis, rugby or basketball, indeed requires that you keep your body on the cutting edge. This can be handled at the gym, or out and about hitting the jogging paths. But no amount of lifting weights is going to mentally prepare you for the tactical aspect. In this regard, you have to look elsewhere. Such as, for example, a mentally demanding game that plays for keeps. Poker.

At its core, poker is a game about deep putting strategies into action, making the most of an opportunity, and recognising good risk versus reward situation. Plus, doing all of the above while keeping a stiff upper lip. There are few other games that offer this combination of skills, but it just so happens that poker is the poster child.

So really, it is exactly what the doctor ordered when it comes to keeping a sportsman’s mind sharp. Plus, it has the added benefit of being able to walk away with pockets loaded with cash, if you manage to excel in the demanded disciplines. It might even be okay to take a victory lap around the table when you win a big pot. Depending on where you’re playing, of course.