Is VR Poker The Future? 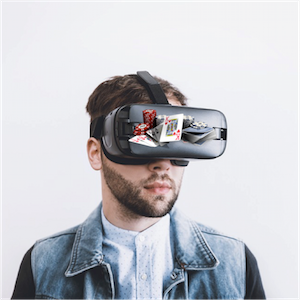 A wise man once asked what the point of having virtual reality was if it doesn’t allow you to play Poker on the rim of a volcano? A very poignant and important question, and one that has surely kept philosophers awake at night. Yes, virtual reality, or VR, is here, and pretty much everything everyone hoped it would be. The technology is truly impressive, and offers a platform for just about every incredible reality that can be dreamed of.

However, this is also an age where online casinos are dramatically increasing in popularity. It doesn’t take even a single degree in rocket science to tell that the two were made to go together. VR in one hand, online casino games in the other, clap the hands together and what do you have? A dream come true.

The most common complaint about online casino games, the standard kind, is that they generally lack in a sense of realism. Sure, the graphics are improved in comparison to a few years ago, and a great deal of effort clearly goes into making them feel authentic, but they still fall a bit short in the opinions of many players.

These online games are also surely on the road to improving and becoming more impressive. But, why not simply take it to the next level, and work in a pair of VR goggles? This would not only provide immersion and realism on the highest possible level, but also likewise provide options that would blow player’s socks off.

As already mentioned, why not play Poker, with friends, on the lip of an active volcano? Or how about in a space station orbiting the sun? It’s not only possible, it’s highly recommended. Plus, yes, you could not only talk directly to your friends, but they could be, in the real world, on opposite sides of the globe.

The first, and biggest challenge is that VR is simply not yet particularly affordable. It is more affordable than it initially was, but still not exactly easy on the wallet. Buying a VR headset is not pocket change, making it a pretty big investment. As it stands, only a small percentage of average casino game players own a VR headset, which means that the market is not exactly brimming with potential. At least not yet.

The second challenge is that making games that support VR is not easy. Standard online casino games are currently basic in design, and can be put together by a team relatively easily. Add a fully rendered, complicate 3D world to that formula, and the production time and costs go through the roof. Such an investment of time and money is asking a lot, and once again, the market is not yet brimming with potential.

Still A Way To Go

Once again, digital Poker in a virtual reality world sounds incredible, and there are already a handful of games that offer the experience. But the format becoming the norm doesn’t seem likely, at least not yet. With a higher adoption rate of the technology, it seems all but inevitable that it would be the preferred way to play. Until then, we’ll all just have to be happy with the games already on offer, which are still pretty good, it need not be said.