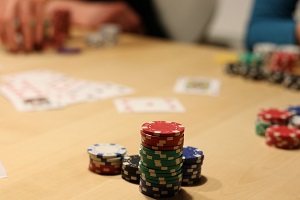 In Poker the vast majority of the game is about betting strategically. Getting a good hand is a start, but there is only a very limited amount of actual skill involved on this front. Since a great hand cannot be willed into existence, most of the action takes place in the betting phases. Hence, this is where the real skills are involved, for the most part.

In the online Poker world, Poker face is not so much acknowledged or even necessary, but at the real, land based tables it is seen as one of the most essential skills a player can have.

Sadly, as far as players are concerned, expressing emotion with our faces is hardwired into our brains. Multiple studies link general attractiveness and charisma to expressing emotion, which is almost entirely done with our faces. Smiling comes naturally, and is basically the cornerstone of flirting effectively. Likewise, frowning when we are upset, or crying when we are very upset.

This is all good and well when you are trying to make a good impression with the human race in general, but not so much when you are trying to keep your intentions in a card game a secret. A major part of playing Poker well is not letting others no if you have a good, or bad hand. Naturally, the very worst players in the world will scream and punch the sky when nailing a Royal Flush.

Or, what if that reaction was pulled instead when having a good hand? Interesting.

There are, actually, very few professional players who attempt to throw opponents off by displaying misleading emotional reactions. This is because it is much easier to instead keep all emotions at a base level, with no signs of emotion betrayed at all. Many players even insist on wearing sunglasses, which is the accepted method of hiding eye activity.

It is not an easy thing to achieve, given what we’ve just said about emotions being hardwired into your brain. Have you ever tried refusing a smile to someone who is smiling at you? It isn’t as easy as you would think. Hence, the term Poker face refers to keep a blank expression throughout the entirety of a game, from start to finish.

Poker-body isn’t a standard term, but it certainly should be, given that Poker face doesn’t refer to just facial expressions. Movements of the hands and arms can just as easily be a giveaway, and in fact, most intention is not betrayed by the face at all, but instead the movements of hands. A nervous finger tapped on a table, or a hand flailing for something to do in order to keep occupied, and landing up scratching an eyebrow.

All these little movements are far more telling than you might imagine, to such an extent that most professional players have undergone training in order to keep their hands under control. Interestingly, most professional actors undergo the same training. Think about that for a moment.

So true Poker face is not just a matter of putting on sunglasses, but controlling ones entire body, at all times. A tip to take home is that talking to a camera and being composed is an excellent means by which to tackle true professional Poker face.