History of the Kings on Playing Cards 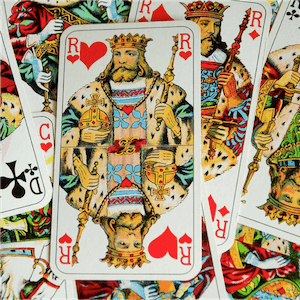 Playing cards have been around since the 14th century, so it makes sense that they have gone through some pretty big changes over the years. Initially, there was a massive difference between each deck produced, with an inconsistent number of cards, as well as some major differences in visual designs and style. As the years drew on, a standard deck gradually began to take shape; giving us the typical deck we have today. The main reason for this standardisation was that mass-production techniques became faster and more efficient thanks to the introduction of a stencil system, which relied on more players using one type of design.

One aspect however, that has remained consistent over the years is the use of Court cards, now referred to as face cards. They have always been used, and although not widely known today, they used to have very specific designs, based on real life historical kings.

Who Are Those Kings?

Even a quick glance at the four kings today will reveal that they have very specific details, and visual designs. Each has a specific pose, holds particular items and even seems to have distinct facial features. Although it will greatly depend on the modern deck being used in this day and age, of course. The specific elements of the king designs has been carried over by tradition, mostly, since few playing card designers these days recognise the origins of the design choices that were made.

Which is to say; since around the 18th century, the kings lost their original identities, but the little details continued to be used, and are mostly still seen in today’s playing cards. So who are these kings, and why were they important enough to be immortalised on a deck?

The King of Spades is David, King of Israel, who is taken from the Old Testament of the Bible. The King of Clubs is Alexander the Great, widely known for his impressive conquering of vast regions of land, and otherwise being an incredible military commander. He lived from 356BCE, to 323BCE.

The King of Hearts is Charlemagne, the King of France, and first Holy Roman Emperor. He lived from 747AD to 814AD. The last, the King of Diamonds, is in dispute. He is thought by some to be Caesar Augustus, and by others to be Julius Caesar himself. Either way, what is in agreement is that is a representation of a Roman Caesar.

So now you know, the 4 kings you see in every deck of cards when playing Poker are based on real, regal figureheads in history.