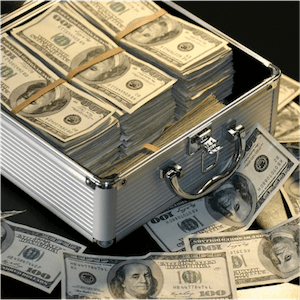 What could be better, and make a poker game more exciting, than an enormous pot? As the amount climbs, so too does the excitement and anticipation levels of the players. The pressure is on, and an almost all consuming silence suddenly descends over the proceedings. The whole situation has the makings of a good film, and the audience will almost certainly be holding their breath until the conclusion. Take a look at the biggest pots ever played for, and won, online and in televised games.

Televised poker has become increasingly popular, with the enormous amounts of cash being thrown back and forth in the World Series of Poker attracting awestruck viewers. Some of the biggest pots ever topped $1 million, which is certainly something to marvel at, given that it was hand that probably took no more than a few minutes to play. Imagine making $1 million dollars in as much time as it takes to cook breakfast.

One hand worth $516,400 was played between legends Eric Boneta, Johnny Chan, Phil Laak and Daniel "Kid Poker" Negreanu in 2017. Chan drew pocket Aces and watched as bet after bet kept elevating the prize pool, first to $30,000, then to $100,000, and finally half a million. Most staggering of all is that Boneta had played the hand on a bluff, having no cards of value.

The most memorable televised pot ever, though, goes to a battle between Tom Dwan and Phil Ivey. As is often the case, the hand that resulted in an all-in, pushing the pot up to a staggering $1,108,500, was nothing too special. At least not initially. But both players landed up with a straight, however Dwan’s happened to be one level better.

Poker games in the online world are perhaps not as intense as their televised counterparts, only because the faces of the players cannot be seen. But this doesn’t mean that the games aren’t still often extremely high stakes.

In 2009 a matchup between Patrik Antonius, and an anonymous Swedish player known only as Isildur1, crashed over into the $878,958.50 department. Most interesting about this game was that it initially seemed as if the payout would be split, with both having a pair of Queens. But Antonius came through on the last card with a straight up to nine, snatching the massive prize on pure last minute luck.

This massive win exceeds the previous record, which was a matchup between Tom Dwan and Di "Urindanger" Dang. On that occasion the payout had been an equally impressive $723,938.

With poker growing in popularity and live streaming games garnering ever-growing audiences, there are sure to be plenty more enormous prizes up for grabs in the future, and we’ll be watching to see who wins.