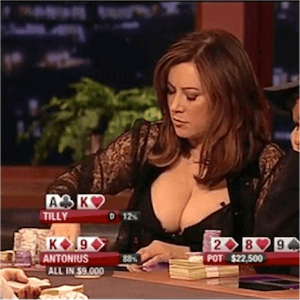 Jennifer Tilly is an accomplished actress, most prominently known for rolls in Liar, Liar, The Fabulous Baker Boys, Bullets Over Broadway, and even as the voice of a killer doll in Bride of Chucky. But one thing that will probably leap out about these roles is that, almost always, Tilly plays characters that don’t exactly excel in the IQ department.

Though anyone making the assumption that this represents Tilly in the real world would be making a big mistake. It turns out that this lady is as sharp as a whip, something that she has proven without question in the world of poker. Recently nominated as a living legend of the game, Tilly is proof positive that Hollywood stars have talents that stretch way beyond looking good on cinema screens.

First Steps Into A Casino

Tilly explained that she was at first afraid of going into casinos, although she really wanted to give the game a shot. It was the intimidation factor, she pointed out, given that virtually every other player at the tables was a man.

But she quickly got over the initial intimidation, and soon found that she was a natural at the game of poker. It wasn’t long before she was cleaning up, and quickly moved on to more high stakes games, in high profile tournaments.

In 2005 Tilly won a World Series of Poker Bracelet, outlasting 600 other hopeful players. The game was No-Limit Texas Hold’em, and the cash prize she walked away with was a stunning $158,000. Not a bad pot for a lady who had been afraid to even go into casinos not long prior.

This big win was followed up that same year by another one, with her taking the crown at Bicycle Casino, at the World Poker Tour Ladies Invitational Tournament. Two big wins in a single year is certainly nothing to take lightly, especially since she was just getting started at this point.

A Life of Poker

Some may have noticed that Tilly has not been very prominent in Hollywood of late, and the reason for this is that she has more or less committed herself entirely to a life of professional poker. Though, this doesn’t mean she hasn’t still been appearing on highly rated shows, including Celebrity Poker Showdown, Poker After Dark, and Poker Superstars.

Her career winnings currently sit at just under $1 million, and in 2014 she was nominated for the Spirit of Poker Living Legend award. Where her career goes from here remains to be seen, but as an actress turned poker star, Tilly is already an accomplished player in anyone’s books.