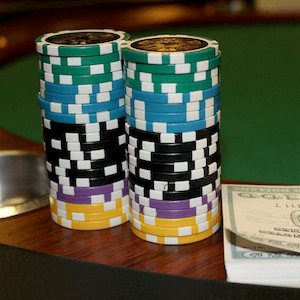 Money is awesome, most will agree. But sometimes, professional poker players land up making bets that go beyond money. Why? Well, mostly because why not? After all, getting a defeated opponent to hand over money is one thing, but watching them try and eat $1,000 worth of McDonalds in 36 hours something else entirely.

No, we didn’t make this up, that actually happened. If you think that’s more than a little bonkers, wait until you read the rest.

This made it onto the list not because the subject of the bet itself was outrageous, but because someone actually offered up $10,000 in order to make it a reality. A bet between poker professionals David Grey and Howard Lederer, Grey offered the whopping sum in exchange for Lederer simply eating a hamburger. That Lederer was a vegetarian made the bet interesting, but it isn’t much of a surprise that he stomached the meat in exchange for such an enormous sum.

Bizarrely, perhaps out of sympathy, Lederer offered Grey the money back, in exchange for him eating a single olive. Grey hated, olives, of course, and refused the bet. Can you say; bizarre?

The Legend Of Johnny Moss

Johnny Moss is a legend in poker circles, not only because he was a great player, but because he was also renowned for making ridiculous bets relating to just about anything. The legend goes that in a pub one evening, playing a few rounds with friends, he was given 15 to 1 odds that he couldn’t win a fight against a well-known brawler. This gave Moss a $15,000 payout to his $1,000.

Moss took the bet, of course, and was beaten so badly that he spent two weeks in hospital. His friends later said that they didn’t expect him to actually take the bet, despite that Moss expressed no regrets. According to him, the odds were so good that he couldn’t refuse.

American player Ashton Griffin, winner of $560,000 in the North American Poker Tour, participated in perhaps one of the most bizarre proposition bets ever. For the ridiculous sum of $300,000, at odds of 3 to 1, he was bet that he couldn’t run 70 miles in 24 hours. The situation was made far worse due to the fact that he took the bet while out drinking with friends, meaning that he’d also be doing it with a handover.

Still, he took the bet, and so outrageous was it that his parents made aggressive attempts to make him throw in the towel before he did himself serious harm. A good thing they didn’t stop him though, since he won, with 50 minutes to spare.

Lastly, we have the bet between friends Andrew Robl and his friend Jay Kwik. Robl bet Kwik that he couldn’t live in a bathroom for 30 days, for the amount of $100,000. The bet was abandoned after only 4 days, however, since it became immediately clear to Robl that Kwik was more than enjoying the living conditions. Robl paid Kwik a compensatory $40,000 to end the bet early.