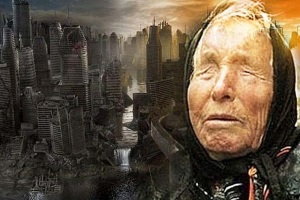 There is a saying that goes, the future looks bright, except when it doesn’t. Psychic powers aside, we all make certain predictions about the future on a daily basis, at least to some extent. We confidently predict what we know to be true, based on past experience. For example, it’s safe to predict that ice will remain cold to the touch in the future, because it’s commonly accepted to be this way.

However, predictions about things like the fact that frozen water will be cool to the touch or even weather patterns, have their origins in the field of science and logic. On the other end of the spectrum, we find those individuals who are able to predict that certain totally random events will happen in the future. These predictions are not based on logical deductions, but instead, on some other unique instinct or supernatural ability.

One of these individuals was Baba Vanga.

Baba Vanga – or Vangelia Gushterova – was a Bulgarian prophetess who was born on January 31st, 1911, in Yugoslavia. Baba Vanga did not have the luxury of a rosy childhood. Her mother passed away when she was only three years old, and her father remarried when she was seven. Shortly after her 7th birthday, Baba went on an excursion with her cousins. What was supposed to be a pleasant day out soon turned into a nightmare when Baba was trapped in a field of crops by a bout of ominous weather.

The storm raged on, forcing Baba Vanga to close her eyes against the swirling dirt and dust. When she did manage to open her eyes, she reportedly experienced a stinging sensation and found that she could no longer see.

Three operations were performed on the young girl, none of which were successful. At age 12, Baba eventually ended up staying at a home for the blind in Zemun, where she remained until she was 18 years of age.

Shortly after her 18th birthday, her stepmother passed away, after which Baba Vanga returned home to help take care of her brothers and sisters. It was during this time that strange things started to happen to Baba. She started to experience visions, hear voices, and even developed the skill of talking to plants and to the dead. This enabled her to predict future events with uncanny accuracy.

A Life In Pictures

Many interviews were performed with people who were close to Baba Vanga during her life, and many of her predictions were written down for later reference. When asked how she managed to predict the future with such accuracy, Baba pointed out that there were creatures present in her surroundings that showed her and told her what was going to happen.

She reportedly also said that when a person was standing in front of her, she would see their entire life on display in her mind’s eye, from birth to death, like a movie. In a way, it is a pity she wasn’t able to predict what would happen in a Poker game, or in the lottery, as then she may have died very wealthy too. But it seems her predictions were based more on world events and how the world would change, rather on things that would yield immediate results.

Apart from making predictions about the lives of individuals, Baba Vanga also accurately predicted future world events. Baba Vanga accurately predicted the Second World War as well as the exact date on which Tsar Boris the 3rd (King of Bulgaria) would die. She also predicted the coming apart of Czechoslovakia, the 1968 riots in Lebanon, the election and subsequent death of Indira Ghandi, the break-up of the Soviet Union and most surprisingly, she predicted 9/11.

Baba Vanga claimed that she was able to communicate with many people who had already passed away, some as far back as hundreds of years ago. According to Baba Vanga, aliens do exist, and some have been living among humans on earth for a long time. Baba predicted that approximately 200 years into the future, humans would start to recognise the aliens living amongst them and would accept them as what one would accept a brother or a sister.

Shortly before her death, Baba predicted that a young girl from France (aged 10) would inherit her unique gift, and that the world would come to know of this girl and recognise the gift of prophesy in her also.

Apart from predictions about the future, Baba Vanga also made a number of interesting statements about modern-day medicine. Baba advised that it was better for people to make use of herbs with healing properties that originated from their country of birth, than from some foreign destination. She also said that modern-day medicine was not inherently bad, but that the constant use of chemicals would hinder the ability of natural herbs to return the body to a healthy and balanced state of being. Perhaps some wise words that we need to consider?