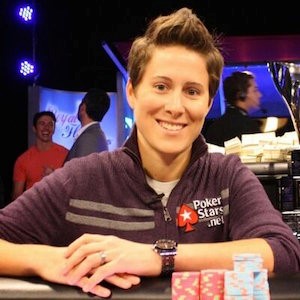 There was a time when it was all but unheard of that a female Poker player would be hitting the big leagues. But this, of course, is all changing, with more and more female faces being seen at the most prestigious tournaments around the world. Though it cannot be denied that it has been a slow process, with the late 90s and early 2000s seeing the first big league female players emerge.

But today, there are a number of highly acclaimed female players, and these are the top 5 from around the world:

Worth an estimated $10.5 million, the name Vanessa Selbst is all but synonymous with excellent Poker playing. Sadly this highly skilled lady has now retired, but for 12 years she tore up the global scene, amassing an enormous amount of cash along the way. She has a total of 3 WSOP bracelets, for 2008, 2012 and 2014, as well as 2 additional bracelets for hitting the final table of those 3 attempts.

She has, once again, sadly announced her retirement in January 2018, but will likely remain a legend for many years to come.

American Kathy Liebert comes in at second, with an estimated value of just under $6 million. Most interestingly, Kathy has been active in the scene for far longer than many might assume, hitting her first World Series of Poker final table back in 1997, and raking in her first million dollar win in 2002. She recently finished in the WSOP top 50 in 2017, and is still going strong.

Worth around $4.2 million, Annie Duke is most noted for having won the NBC National Heads-Up Poker Championship. She has been steering clear of live tournaments, but is still a force to be reckoned with in the gaming world. She had a killer year in 2004, walking away from the World Series of Poker with $2 million, and finishing in 8th place in 2010.

Worth just under $4 million, Annette Obrestad is a truly outstanding player. Hailing from Norway she got her practice at the online tables, after which she won the World Series of Poker Europe in 2007, while not yet out of her teenage years. This kicked off an exceptional professional career, seeing her win the Aussie Millions in 2010. Her most recent success was a top 100 winning at the World Series in 2017.

Last on the list, but by no means the least, Vanessa Rousso is worth around $3.5 million. She seems to have been avoiding the professional scene since 2013, but leaves behind a strong reputation. She won the EPT Grand Final in 2009, raking in an impressive $700,000, while also coming in 5th in the World Series No Limit Hold’em championship. Many hope she will eventually return to professional playing, but even if she doesn't her reputation will live on for decades.